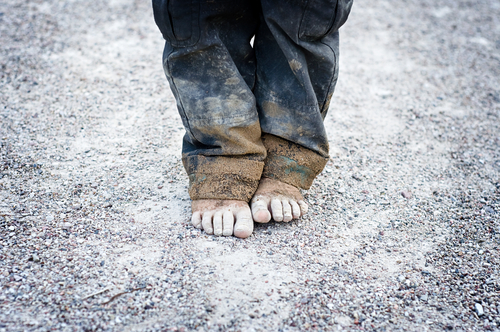 Over on a web site for the blind I often infest, someone said the first day of May, in addition to being May Day and Beltane, had also been something called ‘Barefoot Day’. To this I felt compelled to reply as follows, sort of:

As for that info about May 1st also being ‘Barefoot Day’, well, let’s just say I’ve been there, done that, stepped in sticker beds, into piles of chicken shit (being three at the time I reportedly called it “chicky doo-doo”), and onto sweet gum balls (like small mace heads) plus the occasional bit of hot paving tar, broken glass shards, the odd rusty can or nail, not to mention a sharp, pointed rock or two hiding in some weeds.

That’s why, having somehow managed to reach the prime of my mid-dotage, except for my bed and bath, I always wear shoes.

Of course, I’m sure none of the cultured, sophisticated Select Stories readers ever had any similar childhood/hippie/absent-minded barefooting experiences, right?

Now here’s what Paul Harvey would call, “The rest of the story,” about a close encounter of the worst kind between my bare foot and a pile of chicken manure.

It was my third or fourth summer gracing God’s good green earth. I’d been in the hen house collecting eggs. Being a bit lacking in the ‘hand span’ department, I’d carefully put a couple into each pocket of my overalls. That meant leaving the hen house required a bit of finesse since the threshold was an old railroad crosstie and thus a bit high for my short legs to easily negotiate.

All went well until, while attempting a safe exit, I stepped over that infamous crosstie and into the aforementioned chicken droppings. My reaction was a quick, involuntary high-step back over that dang crosstie. Unfortunately, it proved to be a way-too-high step for the structural integrity of both eggs in one particular pocket.

So there I was, three or four years old, chicken droppings on the bottom of my bare foot while a slimey glob of egg yolk and white oozed through a previously undiscovered hole in my pocket, then down my leg toward the top of that same put-upon foot.

Sad to say, but my mother was of no immediate help. Hearing my cries for relief, she had come to the back door, but instead of rushing to my aid and comfort, she just stood there trying, but most noticeably failing, not to laugh at the piteous spectacle of her only child, standing just inside the hen house doorway, wailing about the chicky doo-doo on his foot. It was all SOOO traumatic.

Here’s hoping this account of my early childhood trauma serves as a cautionary tale to any would-be barefooters.

3 thoughts on “The Barefoot Boy”