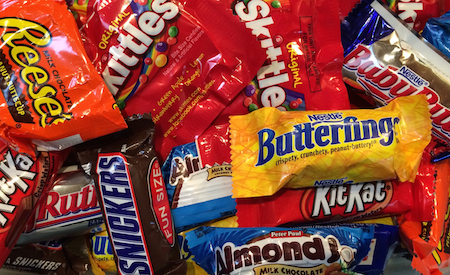 He was a maestro of the subtle.

Equal distribution of ingredients was key. Maybe they wouldn’t notice anything amiss on the first bite, that initial (and literal) pins-and-needles sensation mistaken for taste buds cramping from the delicious sugar rush, or perhaps a particularly sharp nut. But at some point, a new taste would enter the gastronomic equation. It would be the slippery mineral taste of blood as sharp objects punctured soft, innocent membranes, awakening them to the nightmare hidden within their sugary delight. And then perhaps later that night, after the treats made the treacherous journey through their intestines, a whole new nightmare would begin.

Their screams of shock and horror would validate weeks of work. If he performed especially well, it might even make the news. But that was just a bonus.

The economics of childhood candy trading during recess would ensure that his nightmares were distributed across the whole neighborhood like little metallic viruses. Hundreds of day-after candy bowls full of fattening loot would contain at least one piece of his life’s work, and because he focused all his efforts on the favorites, the peanut butter cups, the Snickers bars, the Milky Ways, the Hundred Grands and Almond Joys, his efforts would be among the first sampled.

The work started early each year, in September, when the stores began stocking their shelves with the telltale rainbow of cellophane bags. He was the enthusiastic early bird filling his basket to the brim. Price was no object. Terror was an investment.

He moved to a new neighborhood. Not every year—that would look suspicious—but every two or three. He wasn’t a complete hermit. His neighbors knew him well, and he knew their gossip. “Oh that Mr. Insert Alias Here is such a nice man. He helped me clean out my gutters last fall. He changed my flat tire! He helped Timmy with his curve ball! It’s a shame what happened to his wife. Died in childbirth, I hear.”

Of course, Mr. Insert Alias Here never had a wife, but the stories always helped. It was difficult for a single man living alone to endear himself to a neighborhood. It demanded a careful social balance, a symphony of deception where every instrument mattered. Appear open and available, but not overly eager for attention. Wear suits and ties and carry a briefcase to and from your car Monday through Friday, mow the lawn on Sundays, offer an occasional helping hand to a fellow resident in need. And, of course, decorate the house for every holiday, not just Halloween.

But tonight was the most important night of the year, when the curtain went up and all his careful scrutiny and obsessive confectionery nurturing would be put to the test.

He liked to let the kiddies pick their own fates from his treat bowl. It was more satisfying to give them the illusion of choice. A miniature Snickers bar for the miniature superhero. A peanut butter cup for the pretty princess. A Baby Ruth for the baby. The teenagers who didn’t wear any costumes, who just showed up for the free candy, were his favorite. He always invited them to take extras. “There’s plenty more where that came from, kids,” he would tell them.

Dusk was approaching. The porch light was already on. His fog machines and mechanical ghouls activated. The children would be drawn to Mr. Insert Alias Here’s house like costumed moths. For his own getup, he always picked something special. This year it was a purple velour jacket and top hat, and a warm smile with just enough menace to befit the occasion. He was a caricature of the most famous candy man who ever lived, and whole families would love him for it.

He took his seat by the door, inhaling the dark sweetness from his bowl, and waited for the doorbell to ring. “Trick or treat!” they would cry, and in his generosity, he would oblige them with both.

This is a sample story from Allison M. Dickson’s flash fiction collection THE FOUR PHANTASMS (and other synaptic misfires) available for $.99 on Amazon: http://www.amazon.com/dp/B00BWWBF2W/