Listen to an audio version of The Raft

“I can’t!” My voice, high and strident, carries out across the water.

“Sure you can; come on, try.” My sister’s voice, low and calm, comes to me clearly.

“But you did last year.”

Last year. Perhaps. But this is now, and I know I cannot do it. I don’t answer her.

“Do you want me to come and get you?”

My teeth are chattering together with the cold, so I nod, and watch as she swims toward me.

I am standing in the water, and when I look down my feet seem to be very close to the surface. There are little minnows swimming around — the other kids say that they nibble on your toes, but I don’t believe it. I’ve never felt them do that.

It is the first morning of our summer vacation, which we spend every year at the cottage. We got up early this morning, my older sister and me, in order to go swimming. While everyone else slept, we put on our bathing suits, found some towels and went outside. We didn’t bother eating any breakfast, but went straight down to the lake.

When we got there she dove in; she just went in and started swimming. I put one foot in, and when it was numb with cold, the other one. Moving by slow degrees, I am now just up to my knees, and shivering. The fine hairs on my arms are standing up, and my skin is covered in goose bumps. The shore here is in shadow, and the morning air is not yet warm.

I look at her swimming toward me, her head held high. There is barely a ripple on the surface of the water as she moves.

I am seven, she is going on twelve. She is a champion swimmer, my sister, and is on a swim team. She came in first in something last winter but I forget what it was. Mummy says she was born to be in the water. She can do mouth-to-mouth respiration, and could save someone if she had to. I think she is only happy when she is in the water, or near it.

I can swim a little bit, but am not good, like she is. I am small, and can climb trees, turn cartwheels and stand on my head. This winter I started gymnastics which is lots of fun, but I can’t really swim. I would never go in the water if she weren’t around.

She is getting closer to me, then suddenly disappears. I hold my breath and watch; the minnows around my feet scatter and she is here, coming up beside me, floating on her belly so that she doesn’t have to stand on the sharp stones that cover the bottom of the lake and hurt your feet.

“Well just go in and start moving, and then you won’t be cold.” She stands up anyway, and says, “Now go with me when I count to three: one, two, three!” and at once we are both splashing into the water.

I dog-paddle furiously, trying to keep warm and afloat. She swims smoothly alongside, watching me.

We are headed out to the raft, and it seems too far away for me to make it. It feels like I have been swimming for a long time, but the raft isn’t getting any closer. I cannot touch bottom now; below us it is no longer rocky, but full of thick fern-like weeds. You mustn’t dive among them, or even try to touch bottom, because they can tie themselves in knots and hold you prisoner until you drown.

“I can’t do it,” I tell her, gasping with the effort of swimming and talking.

“Sure you can,” she says, “look how far we’ve already come.” I try to look back over my shoulder but instead get a mouthful of the lake. Spluttering and coughing, I start to flail wildly, struggling to stay afloat.

Reassured by her voice, I calm down; I know that she won’t let anything happen to me.

“Do you want me to tow you for a bit? All right?” I nod. “OK, roll onto your back.” Doing the same thing, she then slides beneath me, passes her right arm over my shoulder, across my front, and holds me under my left arm. I float, supported by her, my head resting near her left shoulder as she moves us along, pulling with her arm and kicking with her legs.

We swim out of the shadow and into the sun, which starts to warm us as it mounts in the sky. I can see the shore now, and to my surprise, it has moved farther away.

We drift along, me lying relaxed and still as she slowly, steadily, moves us nearer to the raft. We glide smoothly between each stroke of her arm and kick of her legs, so that she doesn’t get too tired. I am content — the water is warmer and the sun is higher in a cloudless blue sky.

I could stay like this forever, but she has started to slow down. “Are you OK now?” she asks, and I say yes. She lets go and floats away from me. I stay on my back for a moment, supported by the water, afraid of nothing.

“C’mon, we’re almost there,” she says, and rolling over I see that she is right. The raft isn’t far off now, and in very little time we reach it.

She gets there first and swims under it. It is made of big empty oil drums with a wooden platform on top. You can climb onto it, dive off it, swim under it, and set it rocking, but you can’t sink it. On really hot days, when the lake is perfectly calm and flat, you can swim around and under it, in the water but out of the sun. Sometimes the lake is really rough and the raft doesn’t stay still, but is tossed and pitched about by the waves, and then you will have a hard time staying on it. I don’t know who made it, but it has always been there.

She is waiting for me, and as I reach the raft, comes back into sight. “I’ll be the first one up!” she says, swimming around to where the ladder is, between two oil drums.

“Oh no you won’t, I will!” I scramble up over the end of one of the oil drums, getting a toe hold on it and flipping myself onto the raft before my sister can get up the ladder. There I stand, water streaming from me, laughing and eager for her to join me.

Waiting, I look around. The distance we swam to get here seems enormous. Our shoreline is dark with trees, and I can just make out the white of our cottage, which is set amongst them. No one else is around yet on our side, but from the far shore comes the sound of a motorboat starting up. It doesn’t catch at first, but after two or three tries, finally sputters into life and then settles to a dull rumble, as whoever it is, probably an early morning fisherman, sets off. Two loons pass by, their eerie cry echoing out over the lake. Not too far off something is moving, and from the silence and rapidity of it, I know it must be a canoe.

At last she joins me, and the water dripping from her enlarges the puddle at my feet.

Sleek and wet, she grins at me. She’s not very tall for nearly twelve, is still a little plump, but she stands there, strong and straight.

“Are you ready?” I ask her, and when she says yes, we go to one of the corners. Holding hands, we run quickly to the opposite side and launch ourselves as high and far out as possible. With our hands still tightly clasped, we go sailing off the raft into the clear summer air, and remain suspended there for a long moment until the lake comes rushing up to greet us. 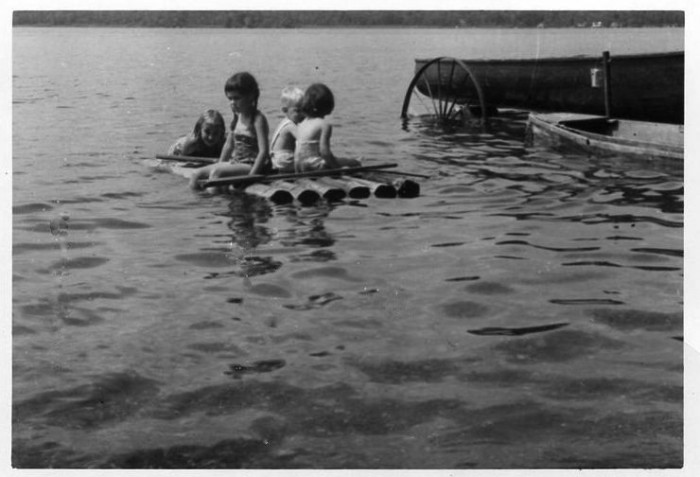