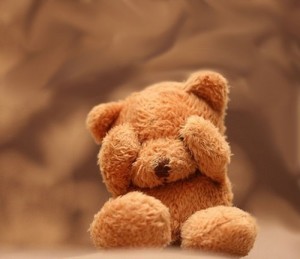 Max was excited. Bubbie was coming over, and Mommy said she was bringing a surprise for him! He could barely wait to find out what it might be.

He thought hard. Maybe it would be a toy truck or a new ball — or maybe even some Legos. Whatever it was, Max knew it would be great, because Bubbie always picked the best presents.

After what seemed like hours and hours, Max finally heard someone climbing the steps. It had to be Bubbie! He ran to the front hall but waited for Mommy to open the door, just as she had taught him.

“Bubbieeeee!” he squealed, bouncing over to his grandmother as soon as she stepped inside. Setting down her purse and the big box she was carrying, she scooped Max up in a hug. This was the best part, because Max liked hugs from Bubbie more than anything else. He felt safe and protected in her arms, and now snuggled against her, for the moment forgetting any thoughts of what she had brought him.

As he always did, Max giggled at the question. He had to be Bubbie’s favorite, since he was her only grandchild.

She lowered him to the floor, then picked up the box. Max studied it with renewed curiosity. It was bigger than a toy truck, not the right shape for a ball, and didn’t rattle like Legos. His excitement started to bubble up again.

“Let’s sit on the couch,” Bubbie suggested. “There’s someone I’d like you to meet.”

“Someone ?” Max asked, his eyes wide.

Bubbie smiled. “Yes, someone — a very special someone, in fact.”

Settling onto the sofa next to his grandmother, Max lifted the lid and pushed away the tissue paper wrapping, finding himself face to face with a most marvelous teddy bear: brown and fuzzy, with a simple blue bow tie, a happy expression and kind eyes, not the stern look that some teddy bears had. Max ran his hands over the bear’s tummy, feeling the softness of his coat, and then hugged him tight. The unneeded box fell to the floor. As usual, Bubbie had made just the right choice — even if it wasn’t Legos.

“Max, this is Bernard,” she told him. “The name Bernard means ‘brave as a bear,’ and Bernard here is a very brave bear. Nothing frightens him, and he will protect you from anything that scares you so you won’t be afraid anymore either.”

Suddenly solemn, Max whispered his thanks. He loved Bernard, he really did, but he didn’t want to be reminded of everything that scared him, for he was spooked by a great many things: spiders, snakes, rats, bats, darkness, heights, being upside down, strangers, monsters, horses and clowns (especially clowns).

Bubbie put her arm around his shoulder and pulled him to her gently. “It’s all right, little one, everyone is afraid of something. Bernard is going to help you face your fears. How does that sound to you?”

Max told Bubbie he thought it sounded very good, at which point his grandmother tightened her hug on both the boy and the bear he still clasped firmly in his arms.

Over the next few days, he formed a fast bond with Bernard, showing him his room, sharing secrets with him, teaching him how to play with toys, and taking him to bed every night.

What no one knew, and no one (not even Bubbie) could have known, was that Bernard was scared of even more things than Max was. So much was new to him. A lot of the items in the closet scared him, as did thinking about what might be under the bed. The pictures on the walls looked strange to him, and the shiny brass knobs on the headboard showed an eerie, distorted reflection.

His biggest fear was falling out of bed, which happened several times when Max relaxed in his sleep and loosened his grip on Bernard. Often, Mommy or Daddy found him and tucked him back in with Max, but sometimes he spent the whole night on the floor, valiantly hiding the dread he felt at being so close to under the bed, in order to spare Max from it.

In spite of his own fright, Bernard dutifully protected Max from all the things that scared him, and soon their hold over Max began to ease. But Bernard was still afraid.

One morning, Max paused in his play with a toy race car and looked thoughtfully at Bernard, who was sitting on the bed watching over him.

“You’re scared of stuff too, aren’t you,” he said aloud.

Little boys and their bears have a special, magical way of communicating with one another. It was by this means that Max came to recognize Bernard’s fears, and that Bernard happened to confirm them.

“It’s okay, everybody’s scared of something,” Max advised, recalling his grandmother’s comforting words. “Here, I’ll show you stuff and then you won’t be scared of it anymore.”

Sensing that Bernard was wary about the idea, he added, “Don’t worry, I’ll stay with you just like you stay with me.”

And so together they explored under the bed, examined everything in the closet, studied the pictures on the wall and made silly faces in the lustrous round bed knobs, laughing at the funny-looking images they created.

Suddenly Max remembered that Bubbie was here while Mommy went out today. He stopped mid-giggle and ran to the kitchen with Bernard tucked securely under his arm. Bubbie was just spooning oatmeal into a bowl for him.

“You must be hungry this morning!” Bubbie said, helping Max into his seat. After settling Bernard onto his own chair, she put another, smaller bowl with just a dollop of oatmeal in front of him, then poured herself coffee and sat down across from the pair.

Hunger was not the reason Max had rushed into the kitchen, however. He was eager to share what he had learned. Still, he didn’t want to hurt Bernard’s feelings, so he put his hands over the bear’s ears before proceeding.

Bubbie asked what Bernard was afraid of, and Max went down the list, proudly finishing with how he had helped Bernard overcome his fears.

“That was very kind of you, Max. And Bernard helped you, too, when you were afraid,” Bubbie observed.

Max nodded, recounting how Bernard had once chased a spider out of his room, and demonstrated the bear growl Bernard had taught him on that occasion.

“He did that even though he was scared himself. It takes a lot of courage to do something when you’re afraid, so I’d say Bernard is very brave indeed.”

“Let me show you how I knew,” Bubbie said, reaching for Bernard. She folded back his simple blue bow tie and right behind it was a tag that read, “Bernard, a Very Brave Bear.”

Max giggled, Bubbie smiled and ruffled his hair, and Bernard felt very proud — and, for the first time ever, also very brave.